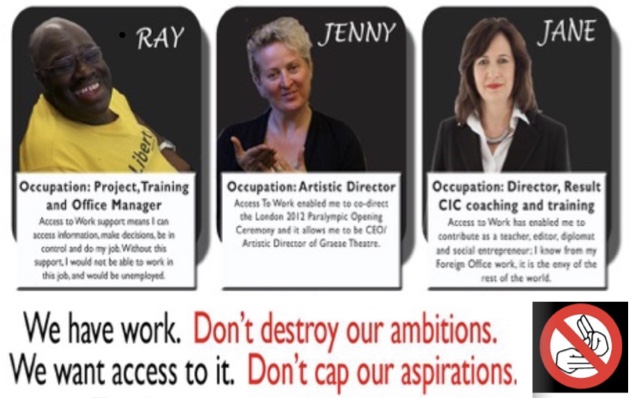 StopChanges2AtW are aware that work is currently being undertaken on the Access to Work cap. Our campaign has been very clear that the only position in regards to the cap should be to scrap it. It is discriminatory and cannot be justified given that it is a net income generator for the Treasury.
We do not anticipate that any further work on the cap will achieve a change in the governments approach.

Louise Whitfield, the solicitor from Deighton Pierce Glynn who took the legal challenge explained; “It is clear from the timing and the sequence of events that the legal challenge to the cap forced the Government to have a re-think about where to set the cap.  The further analysis and cap increase was in direct response to the evidence presented by disabled people, and the legal submissions made to the court within the JR, on their behalf.”

We have been clear in our criticism of the work previously undertaken by the APPG and UKCoD, which we believe adversely affected the outcome of the judicial review and prevented the cap being scrapped.
The cap in our opinion is discriminatory and to have agreed an increase of the cap with government was not in the best interests of those that rely on AtW for the support needed to do their jobs, as evidenced by Graeae Theatre company’s press release. This legitimises the discrimination.
We continue to campaign for the cap to be scrapped.